–   Daniel Alfredsson’s future in the NHL is coming to an end in the near future. Maybe not in term of days but years for sure. He is about the only remaining decent unrestricted free agent left on the current list for 2013-14. But if Alfredsson is to return, he will do so with the Detroit Red Wings. In addition if the Wings are to do any roster moves prior to the training camp to begin, it will be re-hiring Daniel Alfredsson for one last year. 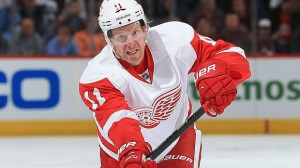 At this point the best chance for Alfredsson to have one last kick at the Stanley Cup is with the Detroit red Wings who have young prospect coming up such as Tomas Tatar, Tomas Jurco, Riley Sheehan and Gustav Nyquist.  Bothered by back problems towards the end of last year and into the playoffs, where he missed a couple games, Daniel Alfredsson is giving himself the summer to rest and assess if he can go for one more year.

When asked on Monday about Alfredsson, general manager Ken Holland stated: “My take is we’re probably going to try to do something with Alfie, He had a good year, 19 goals. When he was healthy, he was valuable.”  His intent was to start skating this week in Sweden and see how his back would react.   Holland mentioned that Alfredsson would skate with other Red Wings players before training camp starts in the first week of  September. “But at the end of the day I think he wants to (skate) and we want to see him skate every day for 2-3 weeks and then let’s see how he feels.”

Alfredsson’s contract when signed, will probably contain a bonus clause which can be used towards the 2015-16 salary cap. He said after the season that if he plays another year it will be only with the Red Wings. Last year, Alfredsson recorded 18 goals and 31 assists for 49 points, in 68 games played.

The Red Wings will carry 14 forwards signed on one way contract for next year and are still 5.2 million under the 69 million dollars salary cap.  Holland also expects all players who had serious injuries such as Pavel Datsyuk, Henrik Zetterberg, Darren Helm and Jonathan Ericsson to be healthy at training camp start. Holland said he’s not looking to sign a depth forward or defenseman from what remains in the free-agent market.

Although the “Olympic trade freeze” is now in effect in the NHL until the 23rd February 2014, many trade rumors will surface as this is the time for general managers to continue negotiating with other teams. This […]

In a year where unrestricted free agency in the NHL wasn’t as deep as any other years, after the frenzy of July 1st is over, the good ol’ question of which team had the best […]