Ryan Miller not returning to St-Louis

– The St-Louis Blues will not have veteran goaltender Ryan Miller with them next year. The Blues have resigned goaltender Bryan Elliott to a three-year, 7 million deal on Monday and have promoted prospect Jake Allen to the no.1 goaltender duo for next year. Miller acquired near the trade deadline with forward Steve Ott in exchange of prospect William Carrier, a first round draft choice, Chris Stewart and goaltender Jaroslav Halak. 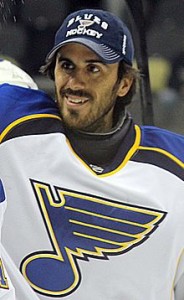 Miller was seen as the goaltender who would bring the cup to St-Louis but after an early elimination to the Chicago Blackhawks, Miller didn’t not bring what was expected of him. So where does it send Miller next year. A few teams are looking getting a no.1 goalie for next year. But for Miller, he is at the point of wishing to win the Stanley Cup and to play on a winning team.

Teams such as the San Jose Sharks pending they reshuffle their roster following their own early elimination an also the Anaheim Ducks. Miller it is known, wishes to be closer to his family in California. We should not count the Vancouver Canucks being only a three hour flight from California. The Canucks since they have traded Roberto Luongo and Cory Schneider last year have not replaced their no.1 netminder with Eddie Lack.

Other notables in the hunt for Miller are the Toronto Maple Leafs, the Washington Capitals and the Florida Panthers. Of course the Flyers should never ignored as well, even if they have extended Steve Mason’s contract earlier this Spring. One thing for sure is that Miller will not be traded at the draft but expect he will be offered. Team s will prefer to wait for their chances via free agency.

If the San Jose Sharks hope to make a deep run in this year’s playoffs, they will need to consider a solid goaltender to support their current no.1 Martin Jones. With the latest resurgence of […]