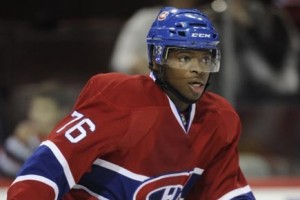 –  Of the 23 NHL players who were eligible for salary arbitration, only two of them ended in front of the arbitrator; Vladmir Sobotka and P.K. Subban. In the case of Sobotka, it’s almost a non-issue since he will play in the KHL for the next three years. But for Subban, you have to question on why it had to go this far. Subban who voluntarily accepted two years ago “a bridge contract” from the Montreal Canadiens has proven himself with a Norris trophy in 2012-13 and a domination during the 2013-14 playoff run by the Habs.

Both sides (Subban with Don Meehan – his agent) and Montreal Canadiens General Manager, Marc Bergevin presented their case yesterday. According to many sources, the Montreal Canadiens offered a 5.25 million salary while the Subban clan came back with a 8.5 million annual salary. For the arbitrator ruling on this case, she can go anywhere in between this salary. Rest assured next year when PK Subban is on his last year of restricted free agency, he will be paid no lower than the decision ruled out by 1:00PM tomorrow.

In this case, the relation between Subban and the Montreal Canadiens may never be the same. This may trigger a desire to pursue a career somewhere when his time for free agency without restrictions come. His unrestricted free agent status will come in July 2016. PK Subban’s agent Don Meehan has the reputation across the league to be a hard negotiator, one who will ask maximum dollars despite questionable performance by his players.

In this case, he is after top dollars for his star defenceman. The comparison with Nashville Predators defenceman Shea Weber and the Los Angeles Kings Drew Doughty cannot be established, since these contracts were signed a few years ago now in a different context especially the one where the Rogers Sportsnet deal last year has changed the whole spectrum of teams revenue and salary cap limit.

It will be important to follow the sequence following the decision of the arbitrator today or tomorrow. Will this place the Montreal Canadiens to trade Subban before he heads out to unrestricted free agency in 2016? It may be the case in order to maximize the return at a lower salary. This could include a pitch for the 1st pick next year where Connor Crisp will be available or two great players at a modest salary. A defenceman and a forward on the right flank. This will have many repercussions that we will follow carefully.

Although the “Olympic trade freeze” is now in effect in the NHL until the 23rd February 2014, many trade rumors will surface as this is the time for general managers to continue negotiating with other teams. This […]