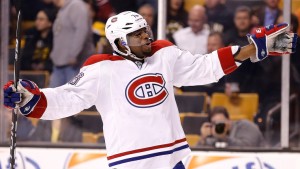 “We are very pleased to have reached a long term agreement with PK Subban,” Canadiens general manager Marc Bergevin said in a statement. “This agreement helps consolidate the future of our team. A key element of our group of young veterans, P.K. plays with a high level of intensity every time he steps onto the ice. Despite his young age, he carries a great deal of experience and brings contagious energy to the team. Defensemen of his level are a rare commodity in the NHL.”

Subban was coming off a two year contract worth 5.75million dollars will now be set for the next eight years, the maximum long term contract can be signed for. Subban had plenty of arguments to obtain this lucrative contract. in 2013,  he was awarded the Norris Trophy as the NHL’s top defenceman after scoring 11 goals and recording 27 assists in 42 games played. Last year during the course of the 2013-14 season, he notched 10 goals with 43 assists in 82 games played for the Habs.

Of the 23 players who were eligible for salary arbitration Subban was one of the two players to plead his case in front of an arbitrator in Toronto. When the lucrative deal was agreed by both parties, the appointed arbitrator, Elizabeth Neumeier had not reached a decision following a four-hour session on Friday from Don Meehan, Subban’s agent and Marc Bergevin from the Montreal Canadiens.

It is clear now, Subban will need to perform and the expectations will be very high. Early reports have the defenceman being considered for the captain position within the team. We’ll see!!!

In our trade bits, we go quickly of potential trades likely brewing or talks surrounding certain teams and players susceptible of being traded. Fleury’s Landing Spots When the announcement of Marc-Andre Fleury’s decision to waive […]