A look at the signing of Anton Khudobin and what it means to the trade deadline today. 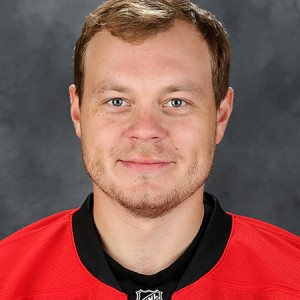 You can now take goalie Anton Khudobin off the trading block for the Carolina Hurricanes. This means now Cam Ward or Justin Peeters could now be in play at the trade deadline today. Khudobin along with his other two goalie counterparts were at some point or another on the trading block throughout the season.

Yesterday, Anton Khudobin resigned a contract extension of two years worth 4.5 million dollars. This year Khudobin played in 22 games compiling a record of 13-8 and 2.17 goals-against-average with a .927 save percentage. Originally drafted by the Minnesota Wild in the seventh round (206th overall) of the 2004 NHL Entry draft, Khudobin played for a short stint in Boston sharing duties with no.1 goalie Tukka Rask. Last year, in the off-season, Khudobin signed a one-year deal worth 800,000 with the Hurricanes.

Brad Boyes is staying in Florida

One other player that is now off the market is right wing Brad Boyes. The forward signed a two-year contract extension with the Florida Panthers worth 2.625 million dollars per year.  Rumored throughout the season to be leaving the Panthers, Boyes is a nine year veteran who brings a veteran presence and leadership while filling a third line duty really well. Boyes was coveted by many teams, this season. He was due to become an unrestricted free agent on July 1st.

The 31 years-old has scored 17 goals and recorded 11 assists in 59 games. His current contract was for one year set at one million dollars. Selected in the first round (24th overall) of the 2000 NHL Entry Draft by the Toronto Maple Leafs, Boyes has played for numerous teams throughout his career, notably the Boston Bruins, St. Louis Blues, Buffalo Sabres and New York Islanders. In his nine year career, Boyes has a record of 185 goals and 250 assists for 435 points.

Jake Gardiner not shopped but… According to NHL Insider Darren Dreger speaking to James Duthie n TSN, Jake Gardiner from the Maple Leafs is not being shopped but the Leafs have made it clear on […]