With the deadline fast approaching on Wednesday March 5th, 2014, NHL teams are now in the final stretch of assembling the right pieces in order to secure a playoff spot or to go deep into the playoffs. 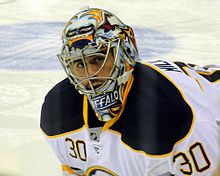 The transaction between the two teams that were rumored to acquire the player they coveted finally occured Friday night. The Buffalo Sabres have sent veteran goaltender Ryan Miller and forward Steve Ott to the St-Louis Blues in exchange to St-Louis goaltender Jaroslav Halak and forward Chris Stewart. In addition, the Blues have sent prospect William Carrier, a 2015 first round pick and a 2016 third round pick.

It was known for some time that Ryan Miller’s days were counted in Buffalo. A free agent at the end of this season, Miller gets the chance to win a Stanley Cup with a team who has the window wide open to accomkplish that. Miller’s negotiations never really got to a point where he would extend his career in Buffalo. Two days ago, Buffalo Sabres general manager Tim Murray did mentioned that a trade involving his no.1 goalie was inevitable and likely to happen. Murray won the Vezina trophy in 2009-2010.

This year Miller played in 40 games and has compiled a 15-22-3 and a goal against average of 2,72 with a save percentage of .923. As for Ott, who was acquired from the Dallas Stars, he cumulated 20 points in 59 games played while piling 55 penalty minutes.

Jaroslav Halak who was the hero of the 2010 playoff with the Montreal Canadiens, was traded to St-Louis that summer in exchange for center Lars Eller and forward Ian Schultz. Since then, Halak has been sharing the goaltender duties in St-Louis with Brian Elliott. Jaroslav Halak had a record of 24-9-4, a 2,23 goal against avearge with ,917 save percentage and 4 shutouts.

Also from the Blues, come Chris Stewart who was rumored to head to New York with the Rangers. Stewart who was rumored all season long to be traded at some point this season prior to the trade deadline had 15 goals in 58 games and 112 penalty minutes. William Carrier the other player involved in the deal for the Blues, is a 2013 second round draft is currently playing in his fourth season in the QJMHL with the Drummondville Voltigeurs.

Ryan Miller not returning to St-Louis – The St-Louis Blues will not have veteran goaltender Ryan Miller with them next year. The Blues have resigned goaltender Bryan Elliott to a three-year, 7 million deal on […]