Jason Spezza wants out of Ottawa

–  It is now official, Jason Spezza has asked general manager Bryan Murray for a trade. According to Pierre Lebrun, from TSN NHL Insiders, Murray has told him after the NHL GM”s meeting that Jason Spezza has asked to be traded. Lebrun stated that Murray has already started to take some phone calls on Spezza but he expects that talks will increase next week and heading into the NHL Draft 27-28 June 14. Murray expect a player that helps them now plus some propsects and high draft picks. Murray has also made it clear, that the price will be high for his centre. Spezza who’s coming on the last year of a seven year contract with the Ottawa Senators will be making 4 million dollars next year with a cap hit of seven million.

Continuing on the rumor front, the NHL Trade Insiders also discussed the possibility of Los Angeles Kings Mike Richards to be an off-season buyout by the Kings. Richards who used to be one of the main pillars with the Philadelphia Flyers and also the Kings in their first ever Stanley Cup quest in 2012 has somewhat dwindled since.  According Darrin Dreger, the Los Angeles Kings are not planning to buy him out because they would to replace the gritty forward but rest assured, Mike Richards wants a bigger role on the team and fourth line center is not an option. He mentioned that the Kings will be sending Richards for a better conditioning but knowing Mike Richards he may just elect to pursue his career elsewhere.

Flyers are looking for Vincent Lecavalier to move on 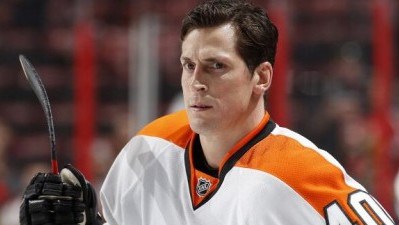 Now that Ron Hextall has taken over the reign of the general manager position with the Philadelphia Flyers, one of his priorities will be to make room under the cap and get some players who could fit into the vision he wants to give the team. And this vision doesn’t include Vincent Lecavalier.  Signed in the off-season last year as a free-agent when he was bought out by the Tampa Bay Lightning, Lecavalier found himself at times on the fourth line. At the hefty price of 4.5 million a season to pay for a center on the fourth line is way too much.  Sources reveal that Lecavalier is definitely in play mainly to free cap space. Lecavalier who holds a no-trade clause on his contract would have to agree first of the destination he would be going to say yes to any deals on the table.

Dan Boyle who was recently traded from the San Jose Sharks to the New York Islanders for a fifth round draft pick is likely not to sign in New York. Boyle is looking for a potential destination where he will win and have a chance at a Stanley Cup before retirement. Although his rights are owned by the New York Islanders until the 1st July, Boyle is to make public by this weekend whether he will seek free agency or stay in New York. According to many in Boiyle’s circle, he will go on the market. According to the NHL Trading Insiders, the Toronto Maple Leafs are high on his list and could be lured to play in Toronto. Dan Boyle is looking for a two-year deal and the Leafs have also interest in Boyle. One other option may be the Montreal Canadiens should veteran defenseman Andrei Markov sign elsewhere

St-Louis goaltender search Although the St-Louis Blues are looked as one of the powerhouse in the NHL, they would like to address some key needs to be able to get through the playoffs and put […]

Steve Mason’s agent is seeking a new deal   – The Flyers goaltender Steve Mason may be having a big pay raise come the end of the season. According to CBS Sports, Brian Stubits the […]