Although the “Olympic trade freeze” is now in effect in the NHL until the 23rd February 2014, many trade rumors will still go on as this time is excellent for general managers to continue negotiations. Today look at the Calgary Flames options with the rebuilding taking place there as well other latest trade rumors in the NHL leading to the trade deadline of March 5th.

Who will be let go on the Flames roster?

With the Calgary Flames sitting in 13th place of the Western Conference only 4 points ahead of the Edmonton Oilers, interim general manager Brian Burke will need to let go some players prior to the trade deadline on March 5th. Burke has indicated recently that the selection and appointment of a new general manager will be likely handled after the 2014 NHL entry draft, which will be in Philadelphia. With this statement, Burke will need to handle this year trading deadline and the task of making the Flames better for he years to come. Burke has been known in the past, as the general manager of the Maple Leafs, to not get excited and stand pat prior to the deadline and even on the deadline date. The scenario this year with the Flames may be different.

Let’s first loo at the unrestricted free agents the Burke is willing to unload. The most coveted will be Mike Camalleri. Camalleri is now 31 years-old and has 21 points in 41 games played. Recently returned from a concussion, Camalleri since leaving the Flames on his first stint with them in 2009, hasn’t been the scorer he used to be when he scored 39 goals in 2008-2009 with the Flames. 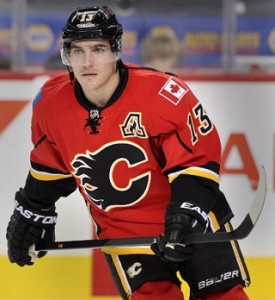 His current contract of 5 years at 6 million per season is expiring 1 July 2014 and that makes him the prime candidate for trading. As a rental player, Camalleri could help with clutch scoring for a team requiring some offense on a second or third line. During the 2009-2010 playoffs, Camalleri was the lead scorer for the Montreal Canadiens playoff run with 19 points in 19 games with 13 goals, leading all goal scorers that playoff year. It is rumored that Brian Burke has met with Camalleri to find out his intentions.

Teams interested in Mike Camalleri are numerous. The Kings at this point seems to lead the way in trying to acquire the scoring winger. Camalleri who was drafted by the Kings in 2001 could complement a hole on the wing in their top six forwards. Other notable teams interested are the New Jersey Devils, the Detroit Red Wings, New York Rangers, the Vancouver Canucks and the Pittsburgh Penguins.

One other player waiting to be traded is defenseman Shane O’Brien. O’Brien who has played in 45 games for the Flames this year. Placed on waivers on 25 January 2014, and demoted to their AHL team affiliate the Abbotsford Heat, O’Brien has had a discussion with Burke and the general manager made it public that he will trade O’Brien prior to the march 5th deadline. This year O’Brien had 3 assists with the Flames. His best season was in 2007-2008 where he cumulated 21 points with the Tampa Bay Lightning.

One other unrestricted free agent which could be leaving is forward Lee Stempniak. Stempniak, 31 is on his last year of a two-year contract he signed in 2012 for 5 million at 2.5 million per year. This year Stempniak has 8 goals and 23 points in 51 games played. The Detroit Red Wings have shown interest in Stempniak despite the fact that the Red Wings general manager Ken Holland stated he would likely stay put leading to the trade deadline. According to panelist Doug McLean on Sportsnet.ca, Stempniak could potentially bring a third or 5th round pick to the Calgary Flames. Like Mike Camalleri, Lee Stempniak has a limited no-trade clause.

Many teams have also been asking about left wing Curtis Glencross, whose has another left on his contract. Glencross who brings a physical aspect to the game has been with the Flames since 2008. He has had his best season with the Flames in 2012, where he netted 26 goals in 67 games. Glencross has only played 21 games this year and is currently on the injured reserve list for an ankle injury. He has also been plagued with knee injuries most of the last two seasons. The Montreal Canadiens have been linked in the past to be interested in Glencross.

Editor’s Note: Expect Mike Camalleri and Lee Stempniak and possibly Shane O’Brien to be gone by the March 5th trade deadline. I doubt Curtis Glencross will be traded especially if he remains on the injured reserve list. Mike Camalleri may bring the Flames a first round pick and or a prospect.