Although the “Olympic trade freeze” is now in effect in the NHL until the 23rd February 2014, many trade rumors will still go on as this time is excellent for general managers to continue negotiations. Today we will look at the Winnipeg Jets possibilities to let go some players prior to the trade deadline on March 5th, 2014.

When the Winnipeg Jets were struggling earlier this season with then head coach Claude Noel, Dustin Byfuglien was seen as the one causing the errors leading to the Jets’ losses. Since Paul Maurice has taken over, he has used Byfuglien in a different role and has better managed the 6’5 defenseman by utilizing him as a forward and also managing his ice-time.

Since the arrival of Paul Maurice, Byfuglien has played better and has 2 points in his last 2 games before the Olympic break. The resurgence of Dustin Byfuglien has somewhat cooled down the trade rumors. Heading into the last stretch of the season, the Winnipeg Jets will need Byfuglien to be at his best and provide some offense on the power play with is large presence in front of the net. The Jets are currently sitting only two points away from a playoff spot held by the Dallas Stars and are 6-3-1 in their last ten games. Teams that were interested in Byfuglien earlier in the season were the New York Rangers, the Chicago Blackhawks and the Boston Bruins. Byfuglien’s contract is hefty at 5.2 million for another 2 years after this one.

Editor’s Note: With the latest resurgence of the Winnipeg Jets under Paul Maurice, the Jets will likely keep Byfuglien for the time being. Paul Maurice has done an excellent job in better utilizing his giant defenseman and Byfuglien has been contributing offensively for the Jets. If the Jets get active prior to the trade deadline, they will probably look at unloading pending unrestricted free agents: Olli Jokinen and Devin Setoguchi.

Those two veterans are probably the ones general manager Kevin Cheveldayoff will dangle to other teams prior to the March 5th trade deadline. In Jokinen, the Winnipeg are offering a veteran scorer with size (6’2″ and 210lbs) who can contribute on the power play. This year Jokinen has 13 goals and 19 assists for 32 points. His downside is his defensive play but for a team wishing to add scoring depth in the last stretch of the season and the playoff, Jokinen could be the solution. Jokinen who’s 35, is on his last year of his current contract paying him 4.5 million a year. A team like the Montreal Canadiens may try to make a pitch for him based solely on his size and low cost on the cap at 4.5 million.

Editor’s Note: Not too many teams are willing to make a pitch for Jokinen because of his defensive play. He is a career minus -141, so that will scare many teams away.

Teams may be more inclined to make a pitch for Devin Setoguchi. Setoguchi who will be another unrestricted free agent  on 1st July has only 25 points in 59 games played. Drafted by the San Jose Sharks in the first round, eight overall, Setoguchi has had his best seasons with the Sharks, particularly in 2008-2009, where he scored 31 goals and assisted on 34 others for 65 points. The Jets acquired Setoguchi 5th July, 2013 in exchange for a second round pick in this yar’s NHL entry draft. It is not known which team may be interested in Devin Setoguchi but his return may fetch a third or fourth round draft pick for the Jets.

With power forward Evander Kane making frequent appearances on the injured reserve list this year, coupled with the fact that Kane and fired head coach, Claude Noel didn’t see eye-to-eye; trade rumors surrounding kane swirled around him all season long. Kane is having a year to forget, no doubt. Despite the fact Evander Kane has had a dismal year, many teams are knocking at general manager Kevin Cheveldayoff’s door to see if he is available. 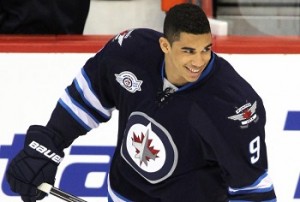 It is not clear what the Jets would like to with their blue chip prospect. This year Evander Kane has only scored 15 goals in 42 games and is a plus -2 rating. His off-ice antics is what seems to scare other teams to make an offer the Jets can’t refuse. Although the Jets have stated that Evander Kane is not on the trading block, they are listening to offers for him. The Montreal Canadiens, the New York Rangers and the Chicago Blackhawks are the teams mostly interested in his services.

Editor’s Note: It would be wise to for the Jets to keep Evander Kane especially with their playoff run which will be until the end of the regular season. If the Jets were to trade Kane, it would be because he has asked to be moved. Kane is signed through the 2017-2018 season and is a 5.25 cap hit for the Jets, which may represent a bargain in the future for the team acquiring his services.

It appears the trading movements are starting increase more and more as many teams are jotting to get the player they need earlier than waiting at the trade deadline. Although not as big as yesterday, a minor […]

Dustin Byfuglien on the trading block? It may be a course of action Winnipeg Jets general manager Kevin Cheveldayoff might opt for in order to upgrade his team. According to Gary Lawless of the Winnipeg […]