Is Patrick Sharp on the market?

– The Chicago Blackhawks will have some serious juggling in the near future, with some of their key players. Patrick Sharp, Brent Seabrook and Johnny Oduya are all subject to be traded by the Blackhawks in order to get under the salary cap following the contract extensions of Patrick Kane and Jonathan Toews to a raise from $6.3 million to $10.5 million each next season. With the Chicago Blackhawks now 2.2 million over the cap for the 2014-15, the Blackhawks management are compelled to cut significant salary. 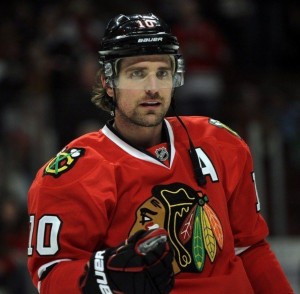 Patrick Sharp has been the subject of some trade rumors lately because of the cap situation following the signing of Kane and Toews. Sharp, who has a cap hit of $5.9 million and Oduya at $3.375 million are the most likely candidates to depart the Chicago roster.  Right now the focus is more on Oduya than on Sharp. With Toews and Kane taking an additional 8.4 million of cap space next year, they will need to clear that much for the 2015-16 campaign. Some of it will be absorbed by players leaving via free agency, but it really seems that one of the big guns has to go by next season

One other player may look at to trade is Marian Hossa. He is older than Sharp and contrary to Sharp, he is not a product from the organization. There is also Brent Seabrook who could free up some space on the payroll, should he get traded. In the case of Seabrook, he has two years left on his contract at a cap hit of $5.8 million. If they keep Seabrook and Duncan Keith (cap hit of $5.5 million), they would be able for the short term, but that would mean parting with Hossa who is already past his prime.

We have see with the contract PK Subban got from the Montreal Canadiens that a defenseman of Seabrook’s caliber could prove very costly in two years. The range of his next contract could well be over the 8 million dollar level. With his age and size, the right-handed will be highly coveted. In other words, the Blackhawks may not have the choice to trade Seabrook for some young cheaper prospects and draft picks. Would the Blackhawks see the writing on the wall in 2016 and trade Seabrook for a nice return as soon as next summer?

Chicago proceeded to one major trade and freeing some salary by sending Brandon Saad to Columbus.  Read more below. Chicago trades Saad to the Blue Jackets The Chicago Blackhawks completed a seven player deal today […]