Is Nazem Kadri on the move?

Surprisingly yes, according to TSN NHL Insider Daren Dreger who declared on the ‘Leafs Breakfast’ a morning show on TSN Radio 1050. He declared on Thursday that he believes the Toronto Maple Leafs have made available forward Nazem Kadri. The Toronto Maple Leafs forward has been scoreless in 16 games. General manager is not eager on moving him due to their weakness at center but his name does circulate in trade discussions. 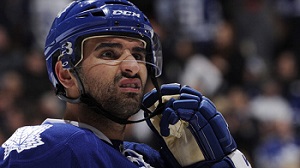 “I have been told bluntly by Dave Nonis that he needs a centre in return,” Dreger said. “Who is going to give you a better centre for one they think might develop into a better centre?

Editor’s Note: One trading partner may be the Oilers who have a surplus of young players. If Kadri doesn’t come out of his slump, look for his name to be discussed even more

Cam Ward is not on the trading block

Darren Dreger also shed more light on whether Cam Ward was a potential trade candidate or not. Wednesday, on NHL Network Daren Dreger stated he didn’t believe Cam Ward will be traded by the Carolina Hurricanes. Dreger mentioned that the Canes may be intrigued in moving him but Ward would only move if it was an offer they couldn’t refuse. He also said that Michal Neuvirth is definitely in play, which adds to the fact that Georges McPhee may be moving Neuvirth sooner than later. Although his manager has requested publicly a trade, McPhee is not in a hurry to trade Neuvirth.

Editor’s Note: The demand for a goalie has somewhat cool down now that Ben Scrivens has headed to Edmonton and the Predators have acquired Devan Dubnyk. In addition, the Anaheim Ducks goaltender Jonas Hiller will not be traded as declared categorically by his general manager yesterday and Pekka Rinne is closer to a return as his rehab from his injury is going as expected.

It has been mentioned a few times on TradeRumors.ca, that Simon Despres is generating some interests on the trade market. Now according to Rob Rossi of the Pittsburgh Tribune Review, the Pittsburgh Penguins have put defenseman Simon Despres in the trade window for other teams to inquire. Now that the Penguins are healthier on defence, Despres was demoted to the Penguins AHL team affiliate Wilkes-Barre on Thursday. Rossi added Penguins General Manager Ray Shero has been mostly dangling and fielding calls on Olli Maatta, Despres may be the first Penguin to be traded prior to the March 5 trade deadline.

In a minor trade today the Edmonton Oilers kept retooling their roster by acquiring centre Steve Pinizzotto and winger Jack Combs from the Florida Panthers in exchange for centre Ryan Martindale and winger Derek Nesbitt. Pinizzotto, 29, has recorded seven points (six goals, one assist) and 67 penalty minutes in 21 games this season with the American Hockey League’s San Antonio Rampage. As for Combs, who’s 25 he has had 21 points (12 goals, nine assists) and 20 penalty minutes in 37 games over two seasons with Rampage. Martindale, 22, has played in 22 games for the AHL’s Oklahoma City Barons this season, posting 10 points (three goals, seven assists).
Nesbitt, 31, has 10 goals and nine assists for the Barons.

On Sunday, the Toronto Maple Leafs begin a four-game road trip  visiting their nemesis from Alberta starting with a pair of games against the Calgary Flames at Scotiabank Saddledome. Going into this road trip, the […]