What will Marty do?

– Many are asking the questions on what future Hall of Famer, Martin Brodeur will do by the trade deadline. The issue is that nobody really knows and everybody from experts to fans have their say on what he will do which is: ask to be dealt to a contender, ask to play as a no.1 playoff bound team or stay put with the Devils and share the duties with Cory Schneider. One thing is sure, Marty Brodeur still has the desire to play and be the no.1 goalie wherever he goes or stay. 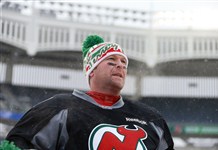 According to his interview with the New Jersey’s The Record, Brodeur stated he’d be ‘open’ to a move that would see him leave New Jersey in favour of more playing time.

“I’m open to anything,” Brodeur told The Record’s Tom Gulitti. “I just want to play. So, like I said in Toronto, if there’s a better situation for me, I’ll take it. If it’s here or somewhere else, it doesn’t matter.” If Brodeur is traded to another team, it will be because he went to general manager Lou Lamoriello and asked to be traded. Potential suitor at this point are the Washington Capitals who haven’t really found the right goalie.