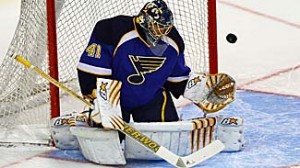 Although the St-Louis Blues are looked as one of the powerhouse in the NHL, they would like to address some key needs to be able to get through the playoffs and put their paws on the Stanley Cup.  According to Jim Matheson of the Edmonton Journal, he proposed the St. Louis Blues could find a goaltender prior to the deadline. He stated that the Blues will not trade prospect Dmitrij Jaskin, but the Blues could be tempted to part Magnus Paajarvi and goaltender Jaroslav Halak. It’s been highly reported across the medias that the Blues are eying Ryan Miller with the Sabres but the Blues will need to wait on whether Tim Murray will resign Miller.

New York Rangers will have to decide on Dan Girardi

The Senators have somewhat regained some of their luster after a dismal November and December. But in January, the Senators are flying high winning six of their last eight games and are in the thick of a playoff spot. Recently extended on his contract with the Senators, general manager Bryan Murray is looking for another piece to his roster. He is looking at a puck moving defenseman or a forward to complement his top-six.

Reached by conference call, Murray stated: “Just watching the progress in the last month and a little bit, I think that the objective now is certainly more than it was a month before.” “We are available to make a deal.” The Sens are currently one point behind Columbus who is in the final playoff spot. Columbus has one game in hand.

Columbus will be buyers

With their recent performance over the last seven games, the Columbus Blue Jackets find themselves in the last playoff spot as of today. Since they will want to make this year count more than ever with the All-Star game in Columbus next year, the Blue jackets may be buyers this year prior to the trade deadline. Columbus would like to add more offense and will also look for a top-six forward prior to the trade deadline. In order to do that, the Blue Jackets could free some salary by trading pending unrestricted free agent Marian Gaborik. Gaborik who’s been injured this year twice has missed a considerable amount of games and before being injured, his performance was poor. GM Jarmo Kekalainen, could be tempted to trade Marian Gaborik in order to go after the player that would help his team acquiring a playoff spot and to continue for long playoff run. Columbus also need help on defence but offense will be his priority.

In this article, we looked at the recent trade of T.J. Oshie to Washington in exchange for Troy Brouwer from the Capitals as well as the retirement of a future Hall-Of-Famer, Martin St-Louis. Oshie traded […]