As we are entering the final stretch of the NHL trade deadline, we look at various trade rumors surfacing acroos the league and through various sources. Today, we have a look at the offers received by the clan Markov and whether the Maple Leafs will make a major deal or not. All this is finalized with trade rumors tidbits.

Details of the offer to Markov revealed 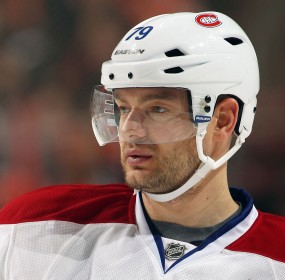 It was discussed and revealed on several social medias and including Trade Rumors.ca that the Montreal Canadiens did make an offer to pending unrestricted free agent Andrei Markov a few weeks ago. The offer was for one year and six million dollars. The Markov clan is looking more for a three-year to four-year deal at the same amount which is six million dollars. TSN Radio 690, host Tony Marinaro stated that fact today that the Habs did make an offer to the veteran defenseman. According to marinaro, Markov is seeking a three-year deal while Marc Bergevin would rather sign Markov to one year at a time.

Today, Markov was interviewed by journalists on the performance of the Russian team during the Olympics and the latest trade rumors as well as his contract negotiations. Markov was very evasive and didn’t reveal anything substantial, only that he wants to stay in Montreal. He mentioned that he loves the city, the fans and the new team management

No big deal for the Leafs

On the same note, James Reimer declared today to medias that he wasn’t happy about his relinquishment to backup behind Jonathan Bernier. “Nobody likes to go from playing a lot of minutes to almost nothing.” “Of course, I am not happy about it but that is not my decision.”

According to TSN NHL Insider Darren Dreger on TSN Radio 1050, he declared that Dave Nonis will be on the lookout for a top four defenseman. Dreger added, that Nonis was only interested in making hockey deals vice acquiring a rental player.

With Marian Gaborik returning from injury on Thursday, we can expect trade rumors to begin this week. gaborik who has been injured a good part of the season has had a sub-par season and negotiations for a new contract were not initialized between Gaborik and the Columbus Blue Jackets management. Gaborik will be seen as a rental player and the Blue jackets should not expect a great return for him. The 12 year veteran has only 12 points this season in 18 games played.

Camalleri may be off the block

One of the highly sought rental player prior to the trade deadline, Calgary Flames forward Mike Camalleri may not be traded after all. There are rumors that interim general manager, Brian Burke has made an offer to camalleri on a new contract. Detials were not revealed on the length or the salary offered by Burke.

October 25, 2020 Trade Columbus Blue Jackets, Montreal Canadiens Comments Off on Max Domi is happy to be in Columbus

Max Domi had two seasons on the roller coaster with the Canadiens. Acquired back from Alex Galchenyuk in 2018, he recorded his best season ever with Montreal with a season-high of 72 points playing mostly […]