Oilers to trade one of their goalies

Who will the Oilers come season’s end? This will all depend on where the Oilers are sitting by 5 March 2013. According to reporter, Jim Matheson from the Edmonton Journal, the Oilers may have to let go one of their goalies. Bryzgalov recently signed for one year only, will be an unrestricted free agent and so is Devan Dubnyk. Dubnyk in his opinion considers himself as the no. 1 goalie while Bryzgalov before being injured in the Dallas Stars matchup. In the meantime, Dallas Eakins will use the goalies in both roles of no.1 similar to the Toronto Maple Leafs situation. 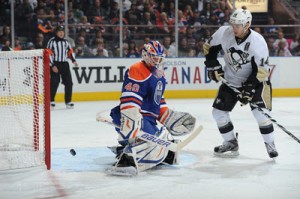 Editor’s Note: If the Oilers are lacking behind in the standing come 5 Mar 13, it will be expected that Bryzgalov will be the one to go and maybe Dubnyk will simply not get resigned. They will attempt to get something out of their goalies either way.

Tim Gleason to be moved soon

According to many medias, it is expected that when defensemen Tim Gleason returns from his injury that he would be traded. The Carolina Hurricanes have entertained many calls about the defenseman. Limited in the amount of games played, Gleason is a solid defensemen that could help teams such as the Oilers and the Islanders.Gleason who’s has two year left on his current contract is earning 4.5 million a year. The defensemen also hold a no-trade-clause and would have to sign off on any deals he is involved in.