Spezza on the trading block

For the Ottawa Senators who had a terrific season last year and a form of regression this year by not even qualifying for the post-season, it’s time for general manager to retool the team for success. He knows with some elements who have been for quite some time now, he is not moving ahead. This is the case particularly with center Jason Spezza. It is known now that the center has been made available to other NHL teams in preparation to the NHL Draft later this month. 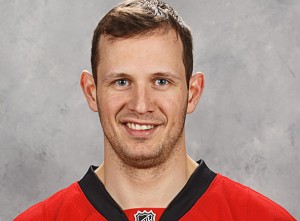 According to Darren Dreger, NHL Insider, Bryan Murray has contacted the other teams and has made it clear that the price for Spezza is the same he paid when he got Bobby Ryan last year from the Anaheim Ducks. So the price to pay is first round pack, a prospect and an established solid player ready step in and help the club.

Spezza who played early in the season with Bobby Ryan never really found the chemistry with Bobby Ryan that Bryan Murray was looking for when he did the trade. Spezza last year compiled 66 points with 23 goals and 43 assists in 75 games.  Spezza who will be 31 on the 13th June will commence the last year of a seven year deal signed in 2007.

Editor’s Note: It is obvious that Jason Spezza will change teams soon but the fact remains if Murray can trade Spezza within his own conference. Teams like the Phoenix Coyotes, the Colorado Avalanche, the Calgary Flames, the Anaheim Ducks or the Vancouver Canucks could be interested. Phoenix and Anaheim have a nice bank of prospect in the line up that could interest the Senators who are conscious of their budget and player spending. With floor cap rising some teams will be pushed hard to climb up to match the floor cap in 2014-2015.

Bobby Ryan resigns with Ottawa For those who expected the Senators to eventually trade winger Bobby Ryan, it just won’t happen. It was clear the Senators intended on keeping Bobby Ryan after acquiring him from […]

Information coming out of Boston are reassuring for Claude Julien’s return but not as sure for Bruce Boudreau in Anaheim. But for Boston, they have player issues they will need to address sooner than later. […]