Thornton or Marleau on the move?

The San Jose Sharks have had another successful regular season but they faltered again in the playoffs losing in the first round to the Los Angeles Kings after leading 3-0 in their round. General manager Doug Wilson has already decided to retool the team to some extent by not offering to veteran defenseman Dan Boyle a new contract extension and trading his rights today to the New York Islanders for a fifth round draft pick. 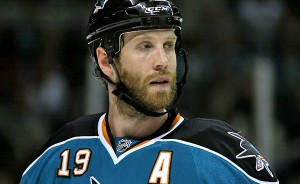 But is that enough and does the team need an electroshock following the abrupt end to the Sharks season. They have just extended Joe Thornton to another three-year extension but is that enough? Is Patrick Marleau the long San Jose Sharks veteran also on the block. According to Darren Dreger from TSN Insider, veteran center Joe Thornton is rumored to be offered to team wishing to strengthen the center line and Thornton could actually fit the bill. A trade involving Joe Thornton could happen as early as the NHL draft according to many.

As for Marleau, the Sharks need his scoring but they also need for him to step up in the playoffs which he hasn’t done again this year. This is very similar to Thornton, like the team they are great in regular season but nowhere to be found in the playoffs.

Coming back to Dan Boyle, the New York Islanders have acquired the rights to pending unrestricted free agent defenseman Dan Boyle from the San Jose Sharks for a conditional 2015 fifth-round draft pick. If Boyle were to re-sign with the Islanders, the pick would become a fourth-round selection. Boyle, who will turn 38 in July, has spent the last seven seasons with the Sharks.

A Stanley Cup winner with the Tampa Bay Lightning in 2004 and a 2010 Olympic gold medal winner with Canada, Boyle is heading into his 17th NHL season. He had 12 goals and 24 assists for the Sharks last season.  Boyle is a veteran of 954 NHL games. In his career, the native of Ottawa has tallied 144 and 417 assists. The Islanders can begin negotiating with Boyle at any time. Teams can sign unrestricted free agents as of July 1.

Joe Thornton signs with the Leafs

Long time San Jose Sharks veteran Joe Thornton has finally made his decision to leave them and sign with the Toronto Maple Leafs. He will earn the minimum wage of $700,000. The veteran is following […]