As Ryan Miller’s play continue to improve this season, his contract issue coupled with the fact that he will become an unrestricted free agent in July on a losing team, the Ryan Miller saga continues to develop on what he will do and what the Sabres will do with him. As pointed out in the Buffalo News, yesterday the Sabres may be tempted to keep him which means resigning him. Pat Lafontaine, the President of Hockey Operations has had discussions with Miller but more on what direction should both parties go. It was seen as an open dialogue. The fact remains that if Miller wishes to stay, this team will need a major reconstruction. Something that Miller probably doesn’t won’t be a part of. 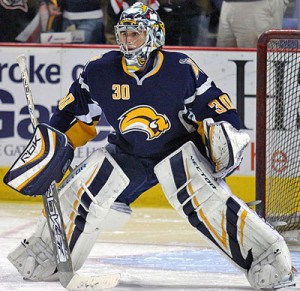 Are the Canadiens and Avalanche talking?

According to the Denver Post and minor Tweeter accounts, it appears that the Montreal Canadiens and Colorado Avalanche are looking at doing a transaction invoving major players. The scouts for the Montreal Canadiens have been following the Colorado Avalanche to many games this season. Some rumors indicated the Habs were interested in forward Paul Statsny but his high-price salary and cap hit could be a deterrent. In addition, Statsny will be an unrestricted free agent. Other rumors also stated that it could mean players such as Jamie McGinn or John Mitchell may be in play and looked at.

One minor trade today in the NHL. The New York Rangers have acquired former first round pick Kyle Beach in a trade with the Chicago Blackhawks. The Blackhawks will get in return forward Brandon Mashinter. Mashinter had no points for the Rangers in six games played while compiling ten penalty minutes. The 23 year-old Beach had four goals in seven games with the AHL Rockford Ice Hogs, the Blackhawks affiliate team. He was selected 11th overall by the Blackhawks in the 2008 NHL Entry Draft.