No move on Vanek

– With the trade freeze now in effect, the Sabres were not able to move Thomas Vanek. Vanek who has refused the seven year 50 million deal proposed by Garth Snow will likely test the free agent market comes July. In the meantime, Snow is trying to obtain whatever he can get for Vanek. The asking price is a first round pick, a prospect and young NHL established player. The price is high for a rental player and Garth Snow may have to lower his price. Snow was hoping to have a deal for Vanek prior to the Olympic freeze which came into effect today at 3PM Eastern. 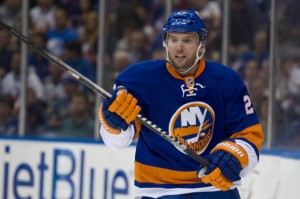 Teams interested in Vanek are: the Los Angeles Kings, the Pittsburgh Penguins St. Louis Blues, Vancouver Canucks, New Jersey Devils. The New York Islanders were hoping to move Vanek in order to save money during the Olympics but that didn’t materialize. Although there is a trade freeze, teams can still negotiate while the Olympics take place and you can believe Garth Snow will be working the phones during that period.

Editor’s Note: In order to trade Thomas Vanek prior to the trade deadline, the Islanders will need to lower their asking price. I believe a first round pick and a prospect may be the key for the Islanders. In this case the Pittsburgh Penguins maybe well positioned to trade once the cap hit allows around 5th March 2014. The Penguins have an abundance of solid defensemen and can let go a first round pick.

The Rangers still haven’t come to a deal with forward and captain Ryan Callahan and defenseman Dan Girardi. Both are set to become unrestricted free agents in July. For Callahan who’s 28, he is asking a long term deal between six and seven million for a duration of seven years, which the Rangers are not inclined to give him just yet. The Rangers following the impasse in the contract negotiations with Callahan have put him on the trading block and are listening to offers. Callahan, this year has 24 points in 41 games with a plus -1 rating.

Minor trade by the Bruins and the Blue Jackets

The Columbus Blue Jackets and the Boston Bruins have concluded a minor trade today prior to the Olympic trade freeze. The Boston Bruins have acquired defenseman Blake Parlett and in return the Columbus Blue Jackets got forward Carter Camper. Camper, 25, has played in 171 career AHL games with the Providence Bruins, recording 165 points on 37 goals and 128 assists. This Carter Camper tallied 8 goals and 23 assists in 41 games with providence. Camper will report to Columbus affiliate AHL team, the Springfield Falcons.

As for Parlett, he is 24 and has recorded 4 goals with 14 assists for 18 points in 37 games. Parlett also obtained 22 penalty minutes with the Springfield Falcons. He has tallied 18 goals and 58 assists and 170 PIM in 192 career AHL games with Springfield and Connecticut. Columbus acquired the 6’1, defenseman on April 3, 2013, as part of a multiplayer trade with the New York Rangers.

Bergevin is looking for top-six scorer

While his team is having difficulties to score goals despite playing better lately defensively, Marc Bergevin general manager of the Montreal Canadiens is actively looking for a top-six scorer. Bergevin has had some mild interest in Buffalo Sabres left wing Matt Moulson, power forward Evander Kane from the Winnipeg Jets, P-A Parenteau with the Colorado Avalanche and also Brad Boyes from the Florida Panthers.

Bergevin’s long-term plan is to build from the draft and within the organization, but the urgency of acquiring offense is nowhere to be found in the Hamilton Bulldogs, their AHL affiliate team. In addition Bergevin wants to add scoring with size. Their best scorer, Max Pacioretty who had a hat trick last night dominates with 26 goals this season and is on pace for a 40-goal-season.

The Canadiens players who are believed to have on the trading block: Rene Bourque, Brian Gionta, Lars Eller, Andrei Markov and Daniel Briere. Montreal had a deal a couple weeks ago with the Colorado Avalanche for P-A Parenteau which aborted before conclusion. The Canadiens acquired earlier this week grittier forward Dale Weise from the Vancouver Canucks in exchange for Swiss defenseman Rafael Diaz.

Editor’s Note: Although this is a trade rumor website, I want to wish a healthy recovery to star defenseman Kris Letang of the Pittsburgh Penguins who suffered a mild stroke. It reminds us that even athletes can have setbacks in their health and for Kris Letang to come forward about it should be nonetheless commended. By bringing awareness to the situation, maybe future lives will be spared.

The latest flurry of trades have now started with teams looking to add depth to their respective roster. Below are some of the trades that just occurred today. Luongo returning to South Florida (Updated) In […]