Boston to make room under the cap

– According to Joe Haggerty from CSNNE.com, the Boston Bruins and general manager are seriously considering the options to move certain players prior to free agency to commence in July aimed at making space under the cap. Currently the Bruins only have 9 million dollars available to spend in this off-season. Players that have been named and could be moving are defenseman Johnny Boychuk and gritty forward Brad Marchand. 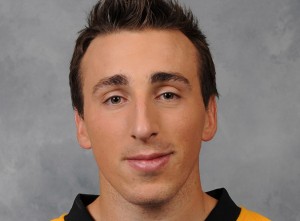 By moving these players, the Boston will be able to resign prospects Reilly Smith and Torey Krug as well as signing valuable fourth liner: Matt Bartkowski, Shawn Thornton and also free agent Jarome Iginla. Iginla has stated he would like to continue his career in Beantown but is looking for a longer term deal with the Bruins.

By sending Marchand and Boychuk away, it would free an additional 8 million dollars for the Bruins.

Editor’s Note: it is obvious Peter Chiarelli will need to make space under the cap. prospects Torey Krug and Reilly Smith are due for a raise and Jarome Iginla has proven this year he can still contribute and would like a longer term deal. Marchand was rumored in the past to be on the trade block based on his antics on and off the ice and this time the Boston general manager may pull on the trigger. Marchand’s role can be assumed by up and coming Reilly Smith.

Stastny not out of Colorado just yet

According to veteran reported Adrian Dater from the Denver Post, veteran centre Paul Stastny who is due to become a free agent in July and the Colorado Avalanche will continue negotiations after the 20th June, 2014. Last March, both sides tried to get a deal done but it didn’t happen. The Colorado Avalanche management staff is confident they can still resign Stastny before he becomes a free agent. Last year Stastny scored 25 goals and totaled 60 points in 71 games played.  In 7 playoffs games, the 7 year veteran cumulated 10 points.

Anaheim Ducks to pursue a center

According to Eric Duhatschek of the Globe and Mail, the Anaheim Ducks will be seeking to add some strength up in the middle by pursuing one of the top three centers available on the trade market. Those players are: Jason Spezza, Ryan Kesler, and Joe Thornton who have been made available by the San Jose Sharks unofficially  Because of the shallow depth in the free agency pool this year, look for teams to opt for the trade route especially leading to the NHL draft on the 27th and 28th June, 2014.

According to Duhatschek, the Anaheim Ducks realized that when they played the Kings in the second round that center line didn’t match up to the Kings and that justifies their willingness to upgrade immediately at that position. The Ducks had Ryan Getzlaf, Mathieu Perreault, Saku Koivu and Nick Bonino while the Kings countered with Anze Kopitar, Jeff Carter, Jarret Stoll and Mike Richards.

The Ducks who have traded last year with the Ottawa Senators when they sent Bobby Ryan would be required to pay likely the same price the Senators paid last year for Ryan. The price is an established forward, a quality prospect and a first round pick. Duhatschek comments that the fact that Jason Spezza salary for his last year of contract being at 4 million with a cap hit of seven million makes him a more attractive player to acquire than Joe Thornton or Ryan Kesler.

Brian Gionta and the Montreal Canadiens are talking

According to RDS.ca, the Montreal Canadiens appear to be set on keeping their captain Brian Gionta.  His agent Steve Bartlett declared on ESPN.com that he has had talks with the Canadiens management staff and that the team has expressed the wish to have Gionta back next season. Bartlett declared: “It’s all about what role Gio will play within the roster and of course the salary he would receive. We will have those discussions starting now until the start of free agency on July 1st.” Gionta who scored 18 goals and assisted on 22 others in 81 games is in the last year of a five-year deal at 5 million a season which he signed in the summer of 2009.