Well the hammer came down in Winnipeg. After two disappointing seasons where the Jets came only close to get in the post-season, the Winnipeg Jets have fired head coach Claude Noel and his assistant Perry Pearn. The Jets who are currently sitting in 12th spot in their Western Conference show a record of 19-23-5 this season. This was inacceptable for General manager Kevin Cheveldayoff. Noel the sixth head coach in the Jets franchise history had also stints as head coach of the AHL Manitoba Moose in 2010 and in an interim position with Columbus Blue Jackets after head coach Ken Hitchcock was fired, 3 February 2010. Noel leaves the organization with a 80-79-18 record. The Jets under Noel, in their first season posted a record 37-35-10 landing out of a playoff spot in fourth place of the Southeast Division. 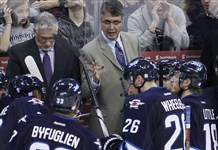 It was perceived by many experts that Noel’s system didn’t fit well with the players in the roster and the rift between him and forward Evander Kane may have been a trigger as well as the utilization of defenseman Dustin Byfuglien.

Paul Maurice who was on the TSN hockey  panel has been named head coach by Kevin Cheveldayoff. He will be the Jets 7th head coach.

Editor’s Note: This was inevitable as the slumping Jets seemed destined to fall deeper in the conference. General Manager will need to address now some changes in the roster and see if he can trade some of the dead wood the Jets are carrying such as Olli Jokinen, Devan Setoguchi or Mar Stuart. Byfuglien may be also a need to address in order to tighten the defense.

Winnipeg could target a goalie

According to Fluto Shinzawa of the Boston Globe, he reported that the Winnipeg Jets may be tempted to target a solid no.1 goalie by the trading deadline. He suggested the Anaheim Ducks and Los Angeles Kings as potential trade partners in their quest for a goaltender. Anaheim, Los Angeles and even Carolina with Washington have an abundance of solid goaltenders apt to help a team requiring depth in front of the net. Shinzawa states the Anaheim Ducks are prime trade partners with the four goalies they have. Anaheim has Jonas Hiller, Viktor Fasth, Frederik Anderssen and John Gibson who are potential goaltenders the Jets could use. The Jets with Ondrej Pavalec and Al Montoya are looking for a solid no.1 goaltender just like the Oilers. He cited the Kings also with the likes of Ben Scrivens, Martin Jones, and Jean-Francois Bérubé.

Editor’s Note: The Jets need to address more pressing needs than goalie. They can add more defense or a top-six forward.

Dallas looking to get rid of older players

As reported earlier last year on this site, the Dallas Stars will be looking to shed some unnecessary salary and also some veterans. Mike Heika of the Dallas Morning News reports that the Dallas Stars will be looking at moving veteran players approaching free agency as rental players by deadline day. Some of these players are: Ray Whitney, Vernon Fiddler and Erik Cole. Fiddler, who earlier in the season requested a trade and Whitney will both become unrestricted free agents at the end of this season. As for Erik Cole, he still under contract until 2015, a contract awarded by the Montreal Canadiens when he signed with the Habs as a free agent in 2011. Jim Nill will be looking at getting draft picks or prospects in exchange for his veterans.

Happy New Year 2015 to all our readers!! Derek Roy sent to the Oilers The Oilers announced on Monday they acquired veteran forward Derek Roy from the Nashville Predators in exchange for centreman Marco Arcobello. […]