The Montreal Canadiens general manager Marc Bergevin announced Saturday that they have resigned head coach Michel Therrien to a four year extension bringing him to a term ending in 2018-2019. 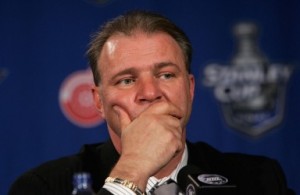 “We’re very happy to have agreed to a contract extension with Michel Therrien for multiple seasons. Michel is an accomplished and experienced coach who has instilled a culture of hard work in our organization while helping develop our young players. Michel and his coaching staff work in a unique and demanding hockey market and the team’s success over the last two seasons are a reflection of their excellent work. This decision reflects our desire for stability and consistency within our hockey operations department”, said Canadiens general manager Marc Bergevin.

Over the past two seasons as head coach of the Canadiens, Michel Therrien has led the team to an overall record of 75-42-13, recording 163 points in 130 regular season games for a winning percentage of .627. Under his leadership, the Canadiens posted a 100-point season in 2013-14, the team’s highest point total since 2007-08. Therrien led Montreal to the Eastern Conference finals this postseason, losing in six games to the New York Rangers.

The Philadelphia Flyers have announced on Friday that they have come to terms with veteran defenceman Kimmo Timonen to a one-year contract extension. Timonen was set to become a free agent on July 1st 2014. Timonen who was acquired in 2007 by Philadelphia from the Nashville Predators along with forward Scott Hartnell in exchange for a first round pick in the 2007 NHL Entry Draft has already spent seven seasons with the Flyers. The 2014-2015 season will be his eighth with the Flyers.

Timonen had six goals and 32 points in 77 games for the Flyers this season. He has 38 goals and 270 points with the Flyers. Timonen who played alongside veteran Chris Pronger during his tenure in Philadelphia has demonstrated he can still play the game at high level. This was reflected again this past year when he won the Barry Ashbee trophy for a third year in a row given as the team’s best defenceman.

Now 39, Timonen will stabilize the Flyers defence corps alongside Braydon Coburn, Luke Schenn and Mark Streit. he was honored in March 2013 for playing in his 1000th game. Timonen who was drafted by the Los Angeles Kings in 1993, has played most of his career with the Nashville Predators and the Philadelphia Flyers. He has also played in four Olympics for his country (Finland) in 1998 (Bronze Medal), 2006 (Silver), 2010 (Bronze) and 2014 (Bronze).

The Montreal Canadiens have announced on Saturday, that they have traded forward Louis Leblanc in exchange for a conditional fifth-round selection in the 2015 NHL Entry Draft. Leblanc was a first round draft pick by the Canadiens in 2009 – 18th overall.

Career wise,  Louis Leblanc never really got a chance to fully develop his talent with the Canadiens. Leblanc had 10 points (five goals and five assists) in 50 career games with Montreal. The 23-year-old from Pointe-Claire, Que., made his NHL debut with the Canadiens in 2011-12, leading team rookies in goals and ranking second in scoring.

Leblanc has spent most of his career with the Hamilton Bulldogs where he compiled 68 points (34 goals, 34 assists) and had 146 penalty minutes in 163 American Hockey League regular season games. With the Anaheim Ducks, Leblanc will have the chance to take a stab at a roster spot in September where a few veterans are expected to leave.

From a statement by general manager, Marc Bergevin he declared this:  “After three seasons with the Canadiens organization we felt that moving forward, the best option for Louis and our organization was to give him the opportunity to pursue his career with another team. Throughout his entire stay with our organization Louis showed great professionalism and a constant desire to improve. We thank him for his contribution and wish him success for the continuation of his career.”

Cam Ward on the trading block?

According to thefourthperiod.com, the Carolina Hurricanes are apparently putting veteran goaltender on the trading block. Ward who has two year remaining on his current contract is a 6.3 million cap hit. It appears that the Carolina Hurricanes will look at newly resigned Anton Khudobin and Justin Peters for goaltending next season. Any trade Cam Ward by the Hurricanes must be approved by Ward who has a full a no-trade clause.

This past year Cam Ward recorded 10 wins and 12 losses with 6 overtime losses in 30 games played. In those 30 games played, he had a goal against average of 3.06 and a save percentage of .898 and no shutouts. Ward will earn a 6.7 million salary next year and 6.8 million in the final year. If the Carolina Hurricanes were to find a taker, they would certainly have to assume part of his salary to make it attractive to another team.

Ward has two years remaining on his current contract with a cap hit of $6.3 million, although he will earn $6.7 million next season and $6.8 million in the final year.

According to Joe Smith of the Tampa Bay Times, Ryan Malone may be on his way out with the Tampa Bay Lightning, which has a compliance buyout remaining. The buyout period begins Sunday and ends June 30. A buyout would save the team a $4.5 million cap hit by spreading two-thirds of his $2.5 million salary ($1.67 million) over two years.

Malone faces charges of cocaine possession and driving under the influence. He has pleaded not guilty to the charges and is scheduled for an arraignment on Monday.