Although the “Olympic trade freeze” is now in effect in the NHL until the 23rd February 2014, many trade rumors will surface as this is the time for general managers to continue negotiating with other teams. Today was a relatively quiet day with regards to trade rumors but we look at what the Dallas Stars are planning to do and is there a plan in place in Vancouver leading to the trade deadline.

A need to unload veteran in Dallas

Jim Nill, who will now be in his first year as a general manager of an NHL team heading to a trade deadline and for his Dallas Stars, the most pressing need is to add skills and youth while unloading veterans to make room on the cap and on the roster. For Nill his first bold move as a general manager was to execute a trade that would send winger Loui Eriksson with Joe Morrow, Reilly Smith, and Matt Fraser and in exchange acquired Tyler Seguin, Rich Peverley and Ryan Button.

This trade proved to be rewarding for the Dallas Stars with Tyler Seguin leading all Dallas players with 56 points. For Seguin, it is a breakout year and for the Dallas Stars this trade was an excellent deal. Seguin and Jamie Benn are the offense for the Stars and Nill will need to add more scoring from a second line perspective. Valeri Nichushkin is in his rookie year and promised to be an elite player in the near term and Rich Peverly has performed to the level expected by Dallas Stars coaching staff. 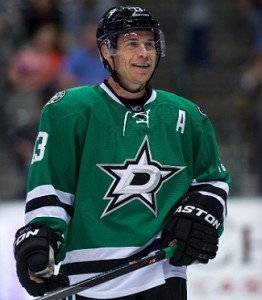 The problem lies with the veterans in the roster and to unload them. They have Ray Whitney who will be a free agent on July 1st, which can help a few teams with his experience. Whitney is expected to go prior to the trade deadline and many teams would like the veteran. He will not be costly for a team looking to add him on their roster. He has been linked to the Pittsburgh Penguins, the San Jose Sharks, Anaheim Ducks and his old team the Carolina Hurricanes.

One other player the Stars are looking to potentially trade and who will be a free agent is forward Vernon Fiddler. Currently earning 1.8 million, Fiddler was unhappy of his playing time back in November and did ask management to trade him through his agent. He later readjusted and stated he wanted to stay citing he liked his teammates and his playing time was increasing. Fiddler is a third liner at best and could help a contender with mission specific role. The two veterans will not bring much of a return for Nill but would create roster space and also cap space for the Stars.

Nill would like to part with veterans Erik Cole who hasn’t been performing to the level expected with only 25 points in 58 games played. Acquired from the Montreal Canadiens for sniper Michael Ryder, last year, Cole has a remaining year on his contract with a cap hit of 4.5 million per year. Dallas may use a compliance buyout to clear Cole off their payroll in the off-season. The other player is veteran defenseman, Sergei Gonchar who also signed through next year at a 5 million dollars cap hit. For Nill, these two players remain an issue to deal with in the off season.

Will the Vancouver Canucks be active?

As previously mentioned, the Canucks and Mike Gillis find themselves in a position they haven’t been used to be in the past years. This year, the Canucks could be missing the playoffs after being Stanley Cup finalist just three years ago. The Canucks are looking to add offense and talent but not looking at rental players. Vancouver has lost 7 games in a row heading into the Olympic break and will be without Henrik Sedin in the short term. In addition their defence is decimated with injuries.

According to Gillis, the Vancouver Canucks may be active but will not repeat the errors of the past at the trade deadline. Last year, they acquired Derek Roy which turned out to be a bust. This year, they will be looking to add youth and prospects, if possible. The addition of Swiss defenseman Rafael Diaz was seen as an insurance policy at a low cost with the ton of injuries the Canucks have on their blue line.

One player the Canucks have dangled to other teams has been defenseman Alex Edler, who’s signed through 2018-2019. Edler has been linked to the Montreal Canadiens but may interest the Buffalo Sabres who have shown interest as well.

It couldn’t have been a better finish to a miserable season to the Edmonton Oilers. Going in as the third worst standing team in the NHL, the Oilers had an 11.5% chance to get first […]