Well the trade finally happened. On Saturday P-L Dubois and a third round selection in 2022 was traded to the Winnipeg Jets in exchange for unhappy sniper Patrick Laine and disgruntled centreman Jack Roslovic. For Columbus obtaining a centreman was vital and a must, which explained Roslovic.

“To get a top centre in this environment is virtually unheard of, and that’s why the bidding was fast and furious,” Cheveldayoff said. “We wouldn’t have moved a Patrik Laine for anyone that didn’t fit that certain criteria of a top centreman or a top defenceman. When that opportunity presented itself, I felt it was necessary that we made that move.”

The trade comes after a tumultuous between Pierre-Luc Dubois and head coach John Tortorella which culminated on Thursday when Tortorella decided to bench Dubois in the last 9 minutes of the game for a reduced effort by Dubois on a shift. As for Roslovic, his place on the depth chart had gone down since last year and the Columbus native had become fed up with the waiting on his future role while holding off to start the season due to contract negotiations gone sour.

Dubois will have to do a quarantine of 14 days before joining the Jets while Laine will have to do only a 7 day quarantine after obtaining a working via to play in the US. The connection between P-L Dubois and the Jets was already established with father Eric being the assistant-coach for the Manitoba Moose Winnipeg Jets affiliate team in the AHL.

For the Winnipeg Jets players, the departure of Laine was emotional despite some of the comments made by Laine last year wanting to play on the top line with Scheifele and his ice time. Some of the players communicated their feelings in a press conference such as Jets captain Blake Wheeler and forward Nikolaj Ehlers.

“He cares a lot,” Jets forward Nikolaj Ehlers said. “This is obviously the tough side of the business. He’s a guy that I’ve had a really good relationship with since my second year, since his first year. We were roommates together on the first road trip. We’ve been brothers since Day 1, so this is not very fun but like I said before, it’s part of the business. It’s the way it goes.”

As for Wheeler, who lived what Laine went through today, he offered some more reflective thought and the idea of seeeing Line now with another team after so much hope was expected in the 2016 second overall pick after Auston Matthews.

“A young man who almost won the goal-scoring title. We connected on a lot of big goals,” Wheeler said. “We tried to give him the puck on the power play every chance we got. He’s a guy that’s very powerful and he’s starting to tap into that a little bit. So, I’ll have nothing but good memories of the time spent on the ice with Patty, and some of the steps we were able to take as a team and an organization, they all included his time here. I’ll be cheering for him, there’s no doubt, no doubt about that.

“I won’t lie. It’s kind of sad. Just rewind four years ago and the excitement when we drafted (Laine) and the steps our organization has taken and he’s a big part of that. It’s disappointing to be having this conversation. It’s the nature of pro sports and for our organization, we move forward.”

In Laine, the Blue Jackets are gaining a rising superstar on the second year of a two-year contract at 6.75M AAV. Columbus will have to sign him to a hefty raise if Laine can put the numbers with them.

Only time will tell who the clear winner of this trade will be in a few years but for P-L Dubois it is an opportunity to have a new beginning under a very different coach style with Paul Maurice. 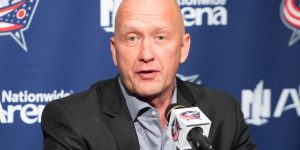 As you know the season is now over on ice but off the ice, it ...read more

February 26, 2016 Trade Winnipeg Jets Comments Off on Ladd to Chicago!

The Chicago Blackhawks have finally pulled the trigger on the trade front by acquiring the no.1 rental Andrew Ladd from the Winnipeg Jets. In addition to Ladd, the Blackhawks get also veteran defenseman Jay Harrison […]

Gardiner in Toronto for a long time –  The Toronto Maple Leafs have secured defenseman Jake Gardiner for 5 more years. The Leafs and Gardiner have agreed to five-year term worth 20.25 million dollars. The […]