Despite the incidents marking the city of Las Vegas, the Golden Knights have found inspiration in this tragedy by pulling two wins in their first two games of the season. Absent from their line up were three key players who were supposed to be the cornerstone of the franchise heading into the new season. Those three players are defenceman Shea Theodore, winger Alex Tuch and marquee free agent Vadim Shipachyov.

Shipachyov signed a two year contract worth 9 million last may. He was labeled as the no.1 centreman for the Golden Knights at that time. Now Shipachyov finds himself playing for the Las Vegas Golden Knights AHL affiliates, the Chicago Wolves. So why general manager Georges McPhee decided to go that route with Shipachyov?

McPhee’s decision on the three players mentioned were above purely decided on the long term good of the team. He determined it was necessary to send Vadim Shipachyov to the Wolves in order to maximize his draft assets.

“We’re an expansion club that has to think long term,” McPhee told NHL.com’s Nicholas Cotsonika on Monday. “The three guys we sent down have all earned the right to be here and we’ll get them here at the right time, or as soon as we can. The point is to try to get some sort of a return if we’re going to move a player, because we’re going to have to draft our way to a championship.”

Shipachyov, Tuch and Theodore didn’t need to be placed on waivers prior to be sent to the minors. It gave the ability to McPhee to buy time with the surplus of defenseman selected during the exapansion draft and via trades. The Golden Knights currently hold nine defenceman on the NHL roster.

“I like that we have a real competitive club right now, but we want to build a champion,” McPhee said. “We’re going to do it the best way we know how, and that’s what we’re doing right now.”

Shipachyov not happy to go to Chicago

When the decision was announced, Shipachyov did not take the decision very well. After playing on top lines in the KHL for the SKA Petersburg, Shipachyov didn’t want to report to the Chicago Wolves. It was explained to him that his demotion wasn’t based on performance but simply a roster move to allow the Golden Knights sufficient time to clear the required space on the roster without losing players on waivers.

This decision will need to be resolved quickly by McPhee. He can’t afford to have a player, he is paying 4.5 million sitting on the sideline forever. Shipachyov patience will grow thin, if it continues to drag on. 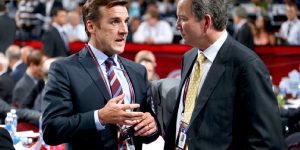 It is expected the Las Vegas Golden Knights will a busy team this month. In ...read more

Things are not going well for forward Alex Galchenyuk and the Montreal Canadiens. The third selection at the 2012 NHL Draft has not responded to head coach Claude Julien’s demands when he was briefly promoted […]