The past weekend saw the last two casualties of the playoffs, the New York Rangers and the Anaheim Ducks, falling to the Stanley Cup finalists the Tampa Bay Lightning and the Chicago Blackhawks.  certain experts and observers sincerely thought the New York Rangers would be returning to the Stanley Cup Finals for a second year in a row especially after the trade deadline when they added Keith Yandle to what was a superior defence corps in the Eastern Conference.  And many also thought the way the Anaheim Ducks were grinding their opponents throughout the playoffs that the Chicago Blackhawks would simply run out of gas against them.  Many saw the Tampa Bay Lightning ending in the Final Four but only few expected them ending in the Finals.  As for Chicago, they are the closest thing to what a dynasty can represent in this decade.  They are a symbol of consistency and they have the depth needed at all levels to go deep in the playoffs.

What are the needs of the New York Rangers?

The New York Rangers have little needs but will require more tweaks than anything else.  They had a lack of offense except for one game where they exploded for six goals, but aside from that one particular game, many of their top players did not respond to Tampa’s continous offense penetration into their zone. the two teams had a similar style displaying speed and execution. Players such as Chris Kreider and Rick Nash did not measure up to the Tyler Johnson, Ondrej Palat and Nikita Kucherov. Center derrick Brassard had a good playoff run and may represent the next option as the top center.

The New York Rangers will definitely need to upgrade maybe one or two players in their top six. This replacement could easily take Martin St-Louis spot who may not be back. The veteran is an unrestricted free agent but has wished to remain in New York to end his career. It will be a tough decision for general manager Glen Sather who will need to make a hockey decision in the off-season. St-Louis who will be 40 years-old on the 18th June can help possibly another team with depth on a third line.

One other situation for the New York Rangers is their goalie Cam Talbot. Talbot, who stood tall during the season going 16-4-3 in 23 starts during Lundqvist’s 25-game absence in the regular season with a sprained blood vessel in his neck. He has gained notoriety in the NHL and could become a good asset for the New York Rangers to trade in the offseason for more offensive depth. The Edmonton Oilers and the Buffalo Sabres still need to address their goaltending woes and Talbot could be a cheap and fortunate solution for those two teams. Talbot is set to be a

The New York Rangers have some young talent in the pipeline but these players are due for their next contract which is synonymous of a pay raise. Players hitting restricted free agency are: Derek Stepan, Jesper Fast, J.T. Miller and Carl Hagelin. Next season it will be Chris Kreider and Kevin Hayes. One other priority out of this group is Derek Stepan. Stepan had a great season and a decent playoff run. He should be getting a considerable raise. They may be tempted to trade defenseman Dan Boyle and bring in a younger defenseman from within the organization.

There is also the management issue with Glen Sather possibly retiring and offering the reigns to assistant general manager Jeff Gorton. Sather who is now 71, hasn’t communicated his interest but experts see it as an upcoming management move by the Rangers.

What are the needs of the Anaheim Ducks?

The Anaheim Ducks are in a very similar situation to the New York Rangers. They do not require major changes and may need to only teak certain positions on their roster. We can expect to see the Ducks in the Final Four again next year.  Where the Ducks may have been a notch below the Blackhawks is at defence. The Chicago Blackhawks have a stallion like Duncan Keith but the Ducks have Cam Fowler. It may be wise for the Ducks to “grow” with Fowler as their own stallion.

Of note, Hampus Lindholm also could be called to fill that role. Francois Beauchemin is set to be an unrestricted free agent this summer, but the Ducks will likely keep him to have that veteran presence. For the Ducks, they may want to add another veteran defenseman capable of moving large bodies in front of the net.

It is clear that these two teams may not require much to be back in the Conference Finals once again next year. But in order to reach the next step certain changes will be needed. Many are thinking that the New York Rangers’ window is slowly closing with certain veterans on their way and a goalie not getting younger as well.

In my opinion, the New York Rangers are still one of the force to be reckoned with in the Eastern Conference along with the Tampa Bay Lightning, New York Islanders, Montreal Canadiens and Washington Capitals. As for the Ducks, their new nemesis – the Chicago Blackhawks may be the model to copy to get gain access to the Finals. They are close and teams like the Blackhawks, St-Louis Blues, Minnesota Wild represent the strength of the West. 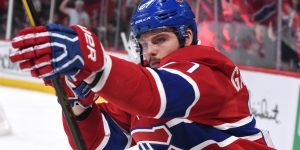 Things are not going well for forward Alex Galchenyuk and the Montreal Canadiens. The third ...read more

As we are entering the final stretch of the NHL trade deadline, we look at various trade rumors surfacing across the league and through various sources. We are now less than a week away for […]

June 17, 2017 Trade Montreal Canadiens Comments Off on Drouin to Montreal