Today on the trade rumor front, we look at some of the rumors discussed which involves Radim Vrbata from the Vancouver Canucks, Eric Staal from the Carolina Hurricanes, Dustin Byfuglien with the Jets and an update on Tampa Bay Lightning prospect Jonathan Drouin.

Below you can view who is creating the buzz on the trade market according to TSN. 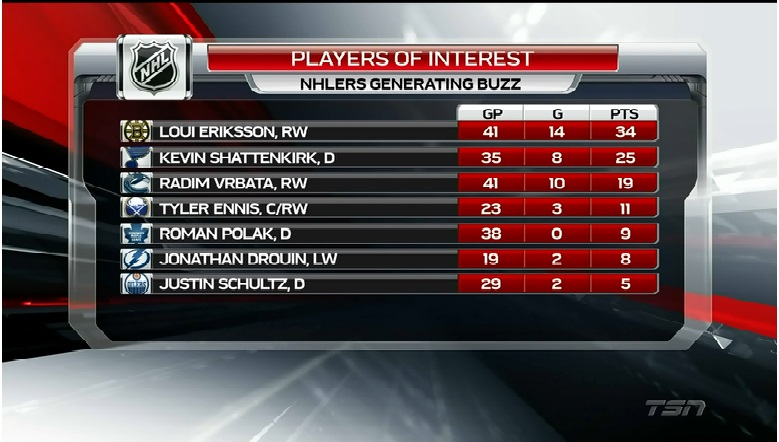 One of the player to watch on the trading block may be veteran Radim Vrbata with the Vancouver Canucks. Vrbata, who’s now 34, was highly sought as an unrestricted free agent after leaving the Arizona Coyotes in 2014. His contract will expire next July with the Canucks and like any high salaried player in the NHL approaching free agency, they are bound to get a really hefty pay raise. With Vrbata, that is exactly what will happen and one has to wonder if the Canucks can afford to resign the forward who completes the Sedins twins on their top line.

With Higgins already on the trade block to make room for upcoming prospects and lower the payroll, Vancouver is now faced with the inevitable of keeping Vrbata or trading him before the trade deadline. He could make an excellent rental for a contending team like the Los Angeles Kings or even the Anaheim Ducks who are in need of more offence. It is doubtful the Canucks would trade Vrbata to a conference rival considering, they are well still in it for a playoff spot. Trade Rumors anticipate Vrbata will be a deadline deal, if the Canucks can’t come to an agreement with their forward. This is a clear case of where the economics may be the issue with Radim Vrbata.

According to Pierre Lebrun on TSN Insider Trading, he doesn’t believe Vancouver has decided on his status on a recent TSN Insider Trading. Vrbata who holds a partial no-trade-clause will still have a say in the team acquiring him. As of last Tuesday afternoon, the Canucks didn’t ask Vrbata or his agent to submit a list of teams he’d be interested in joining. He also mentioned that Vancouver is “retooling on the fly” and that can be complex because as much they want to go with the youth movement, they also want to remain in the race for a playoff spot.

Vrbata can provide some offense to any teams needing it, but so as Vancouver. This season, Vrbata has 11 goals and 21 point in 43 games with a minus -16. Last season, he had a 30 goal season with 31 goals and 63 points in 79 games.

Teams that could be interested in Vrbata are the Montreal Canadiens who tried to sign him as a free agent in 2014, the New York Rangers, New York Islanders, Florida Panthers, New Jersey Devils, Los Angeles Kings and the Anaheim Ducks.

Is Staal on the trading block? Or staying?

In a different segment of TSN Insider Trading, the yesterday edition, the panel also discussed if Eric Staal who has been in trade rumors for the last year or so would actually be traded. They pointed out the fact that the Carolina Hurricanes are not that far from a playoff spot and a chase for that spot may be a motivation point for him to stay in Carolina with brother Jordan. Staal holds a full no-trade-clause and would have to approve any trade requests made towards him.

Whether or not Staal is staying in Carolina or accept to be traded by February 29th will depend a lot on the meeting Ron Francis will have with Staal’s agent Rick Curran at the end of this month. Many teams will be knocking at the Carolina general manager’s door after his meeting with Curran to see what the Hurricanes will do.

Stall this season has scored 9 goals and 19 assists in 46 games played.

Is Byfuglien part of the Winnipeg Jets’ plan?

Pierre Lebrun was asked on the TSN Insider Trading at That’s Hockey whether Dustin Byfuglien will be signed or traded by the 29 February, trade deadline. he stated that Byfuglien is looking for a long term deal which means a minimum of five years and it is assumed is pay will increase significantly.

Byfuglien will be an unrestricted free agent on July 1st as well as captain Andrew Ladd. Depending the team’s position in the standing, they may want to sacrifice one or the other and get as much as they can in exchange for the giant defenseman or the captain. It will also depend on what the salary’s demand is for Andrew Ladd and for how long. He also noted the Jets are still positioned to make a run for a playoff spot and they are not completely out yet.

Our opinion, it just makes sense to resign Ladd who has been the heart and soul of this team and a true Jets. He works every night while Byfuglien’s work ethic has been more questionable since being in Winnipeg. This season, Byfuglien has 11 goals, 14 assists for 25 points in 45 games, while Andrew Ladd is having a sub-par season with 10 goals and 17 assists in 45 games.

On the Jonathan Drouin’s rumors, there are still many teams in the race to acquire the young prospect who has requested a trade through his agent. According to Bob Mckenzie from TSN Trade Insider, the St-Louis Blues are vying for Jonathan Drouin and they could be the front runners. He believes the Drouin trade, if it was to happen may become bigger because of what Tampa Bay wants, which is a puck moving defenceman to support Victor Hedman. This where the Kevin Shattenkirk names comes up which means the Lightning would need to add another player or draft pick or prospect to make this deal works.

In the meantime, many other players are still in the hunt for Drouin. It s believed Montreal still has interest and is watching him closely with his AHL team in Syracuse. This week, the Canadiens sent assistant general manager Rick Dudley, along with two other pro scouts to watch Drouin at their the Crunch’s game.

Steve Yzerman still insists that he is not in a hurry and will not make a trade just to give in on Drouin’s trade request made back in November. He wants the best deal for his team and that is his priority. Many insiders are revealing that it is not the case because Yzerman needs to focus on Steven Stamkos’ contract negotiations and that the Drouin trade request has become a distraction and a change of focus to resign his star center.

In this article, we looked at the recent trade of T.J. Oshie to Washington in exchange for Troy Brouwer from the Capitals as well as the retirement of a future Hall-Of-Famer, Martin St-Louis. Oshie traded […]

Only two weeks until the trade deadline set for the 29th February 2016. Although there are a few rumors out there not much action is happening on the trading front. below is a quick mix  […]