It is expected the Las Vegas Golden Knights will a busy team this month. In preparation to the upcoming expansion draft June 21st, general manager Georges Mcphee and assistant general manager Kelly McCrimmon will have their work cut out. Met at the NHL Combine in Buffalo, NY, McPhee stated some deals could take place this week after the preliminary talks took place in Buffalo with the other general managers. Some teams like the New York Islanders, the Chicago Blackhawks and the Anaheim Ducks are looking for McPhee to take some payroll off their shoulders. This could really well mean the Golden Knights may take a veteran or two with a high cap in exchange to a solid draft pick.

Managing a team with prior to an expansion draft within a salary cap world is totally different than the previous expansion draft, which took place seventeen years ago in the NHL. This is a fact Georges McPhee will exploit to its maximum. McPhee has been listening to all general managers willing to strike a deal in one way or another. Other general managers are desperate to unload heavy contracts and make some space under the salary cap.

“We have a lot of teams offering us big contracts,” McPhee said Saturday at the NHL Scouting Combine. “We’ll take a few of those, for the right price.”

Without any hesitations, the price for those toxic contracts are draft picks. McPhee intends on building his franchise through the draft and not through free agency. His plan is to build a solid pool of draft picks for the 2017 NHL Entry draft and beyond. Although the expansion draft will be important, McPhee believes strongly in acquiring prospects for the future.

McPhee indicated he was surprised how some teams were desperate to shed those contracts.

“There’s been a lot of discussion, and a lot of the guys (GMs) have been forthright about what they’d like to do and who they’d like to protect,” McPhee said. “We’re trying to find ways to accommodate each other.”

On the weekend, McPhee said the first deals might be finalized in the next few days.

“We’re far along on a couple that I imagine we’ll have something done soon,” he said.

When asked about acquiring Alex Ovechkin, McPhee simply replied he was not in the business to obtain a marquee player such as Ovechkin. He also added, “I don’t think there’s going to be anything happening there.

“The face of our franchise will be our logo. That’s the way we’re trying to do things by being team-centric.

“We’ll try to get as many good players as we can. But it’s all about building the right team, about chemistry and all those clichés. But that’s real.”

When asked on how many deals, he expects to make prior to the expansion draft, McPhee was not able to say exactly how many deals he’ll make before June 21. One thing for sure, is that he will be listening to all offers coming his way and make the best deal for the Golden Knights.

“You try to do the best deal you can on a team-by-team basis,” he said. “You try to make a deal that’s fair and reasonable for both sides.”

Nolan Patrick was reported to be in Montreal over the weekend where he met the Montreal Canadiens’ management but also to be evaluated by the Canadiens medical team. Patrick also visited New Jersey’s staff and facilities as well as the Philadelphia Flyers. For New Jersey and Philadelphia, they are selecting first and second respectively but Montreal is selecting 25th overall. Could general manager Marc Bergevin have something on the table for the first or second pick? Montreal is desperate in acquiring a centreman with the size of Nolan Patrick. 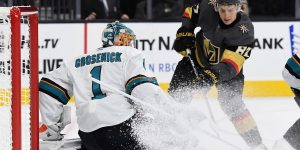 Is Shipachyov destined for the AHL or the KHL?

Despite the incidents marking the city of Las Vegas, the Golden Knights have found inspiration ...read more

As we are entering the final stretch of the NHL trade deadline, we look at various trade rumors surfacing acroos the league and through various sources. Today, we have a look at the offers received […]